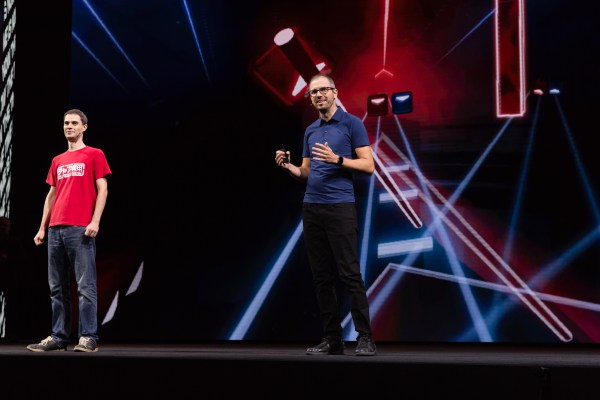 Virtual reality doesn’t have many hit games yet, but Facebook is buying the studio behind one of the platform’s biggest titles.

Facebook announced today that it will be buying Beat Games, the game studio behind Beat Saber, a rhythm game that’s equal parts Fruit Ninja and Guitar Hero — with light sabers of course.

Terms of the deal weren’t disclosed, but we’re sniffing around for a price tag. The studio will join Oculus Studios but will continue to operate independently at their HQ in Prague.

This is an interesting direction change for Oculus, which has spent much of the past four years refining how it grows the content ecosystem for its virtual reality headsets.

Initially the studio produced some of the content in-house while dumping hundreds of millions of dollars into tons of exclusives from indie studios that were interested in playing around with the VR medium. In the past couple years there’s been a new direction change as the company has funneled more money into fewer high-profile studios, trying to court big titles to the Oculus platform. slowly moving away from in-house VR content production over the past several years, instead opting to back third-party studios building content.

Buying Beat Games and bringing it into the fold of Oculus Studios suggest Facebook may be interested in following the strategies Microsoft and Sony have employed as they’ve bought up small studios and funded new titles. One thing Facebook is claiming they aren’t after is platform exclusivity, saying Beat Games will continue to support the platforms that they are already on.

So, what’s in all of this for Facebook then?

Beat Games was one of the more successful VR game studios out there — they had announced earlier this year that they had sold more than 1 million copies of the game — but part of the reason they were prosperous was because they were so lean. When I profiled the studio last year, they had just 8 employees and had opted out of raising any VC funding.

Meanwhile, as VR’s most popular game, Facebook had a bit riding on their continued success. Facebook highlighted the studio’s success specifically at its its VR developer conference and had included a limited version of the studio’s game for free on its Oculus Quest headsets. Buying the studio means allowing them to expand ambitions without being concerned about profitability.

Beat Games had begun expansion by partnering with musicians to release their songs as levels in the game, partnering with artists like Imagine Dragons and Panic at the Disco to bring paid level packs to Beat Saber. One can imagine that Facebook will have a much easier time making conversations happen with top artists.

One thing that die-hard fans of the game will likely not enjoy is how this acquisition will impact user mods. The studio had introduced tools for users to create their own songs with uploaded audio files and unsurprisingly there’s a good deal of content that’s probably not supposed to be on there. With a small game studio that stuff was more likely to slide, but Facebook has the resources to crack down on it so I’m guessing they’ll have to.

Exiting to Facebook is one of the few ideal M&A outcomes in mind for investors that are looking to back a consumer VR startup. Beat Games got there without any venture backing. I profiled Beat Games earlier summer, and spoke with co-founder Jaroslav Beck about his desire to keep the team small and his concerns about survival.