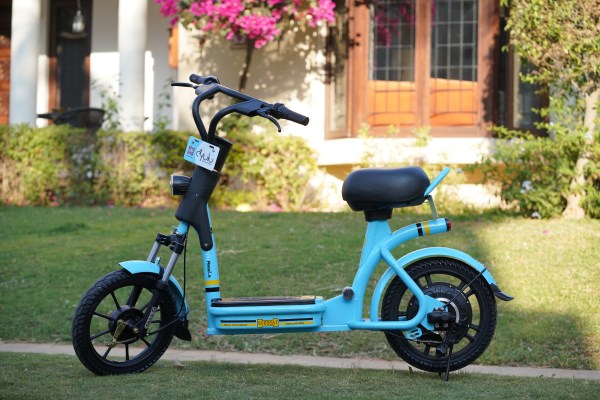 Yulu, a Bangalore-based electric bike sharing platform that maintains a partnership with Uber, said today it has won the backing of one of the country’s largest automaker firms.

The two-year-old startup said it has entered into a strategic partnership with Bajaj Auto, which has also funded Yulu’s $8 million Series A financing round. As part of the partnership, Bajaj will co-design and manufacture future generation of Yulu two-wheelers, Amit Gupta, cofounder and chief executive of Yulu, told TechCrunch in an interview.

Yulu, which operates in Bengaluru and recently entered portions of New Delhi and Mumbai, has raised about $18.5 million to date, he said.

The startup maintains over 3,000 electric bikes on its platform. A customer can rent the bike through Yulu’s app for 14 cents, pay another 14 cents for each hour of usage and then park it at the nearest zone.

Gupta said Yulu plans to have 100,000 two-wheelers in its fleet by end of next year. And that’s where its partnership with Bajaj Auto would come in handy. The startup currently relies on its Chinese original design manufacturer partners to build its bikes. But Bajaj Auto, which has decades of building two-wheelers in the nation, will be taking care of the manufacturing from here, he said. “They clearly have much better understanding of Indian context than most,” he said.

In a statement, Rajiv Bajaj, Managing Director of Bajaj, said, “in Yulu we find an experienced and committed partner with robust achievement of success metrics in a very short time. And this is why we decided to partner with them in their journey of bringing Yulu service to every neighborhood of Urban India.”

Yulu is also expanding its presence quickly in the nation. In Delhi, it has been granted the permission to offer electric bikes at 250 subway stations. “We are already servicing in nine of those,” said Gupta, who also co-founded advertising tech giant InMobi.

“We work through clusters. So we deploy about 1000 vehicles, and set up 200 to 300 parking stations and 25 to 30 charging stations. We have been able to replicate this cluster model in many places,” he said.

These bikes can ride as fast as 35 kmph (21.7 mph), and cover 60 kms (37.2 miles) in one charging cycle. The startup works with neighborhood stores, individuals to expand its parking and charging stations. “It’s very economical,” Gupta said. Yulu also has an army of workers who swap the used battery with freshly charged one, he said.

The market of two-wheelers has grown in India despite the proliferation of taxi services in the country in recent years. With major cities in India grappling with ever growing traffic congestions, the future of two-wheelers seems brighter than ever. Gupta said Yulu’s partnership with Uber has chugged along smoothly and they may extend it soon.

Ride-hailing giant Ola has invested $100 million in scooter rental startup Vogo. Both Yulu and Vogo compete with Bounce, which is also based in Bangalore. Ather Energy, another Bangalore-based startup that manufactures electric-scooters, raised $51 million in May.