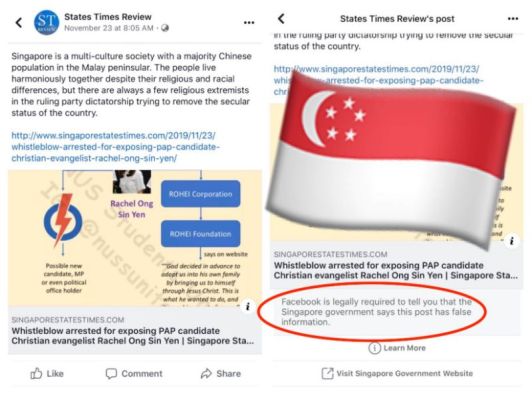 Facebook added a correction notice to a post by a fringe news site that Singapore’s government said contained false information. It’s the first time the government has tried to enforce a new law against ‘fake news’ outside its borders.

The States Times Review post contained accusations about the arrest of an alleged whistleblower and election-rigging.

Singapore authorities had previously ordered STR editor Alex Tan to correct the post but the Australian citizen said he would “not comply with any order from a foreign government”.

Mr Tan, who was born in Singapore, said he was an Australian citizen living in Australia and was not subject to the law. In a follow-up post, he said he would “defy and resist every unjust law”. He also posted the article on Twitter, LinkedIn and Google Docs and challenged the government to order corrections there as well.

On the note Facebook said it “is legally required to tell you that the Singapore government says this post has false information”. They then embedded the note at the bottom of the original post, which was not altered. Only social media users in Singapore could see the note.

In a statement, Facebook said it had applied the label as required under the “fake news” law. The law, known as the Protection from Online Falsehoods and Manipulation bill, came into effect in October.

According to Facebook’s “transparency report” it often blocks content that governments allege violate local laws, with nearly 18,000 cases globally in the year to June.

Facebook — which has its Asia headquarters in Singapore — said it hoped assurances that the law would not impact on free expression “will lead to a measured and transparent approach to implementation”.

Critics say the law’s reach could jeopardize freedom of expression both in the city-state and outside its borders.