Fortnite gets lightsabers, courtesy of ‘Star Wars: The Rise of Skywalker’ promo 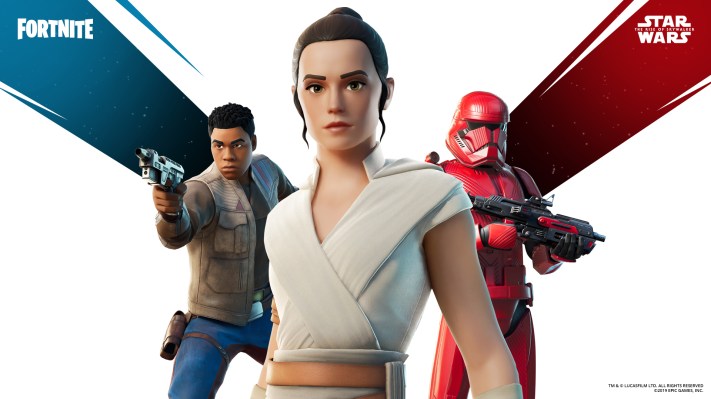 The final installment of the sequel trilogy is getting a lot of creative promotion — even by Star Wars standards. With The Rise of Skywalker out in just under a week, J.J. Abrams (and some spotty server issues) paid a visit to Fortnite. The director showed off an exclusive clip from the upcoming film featuring the familiar trio of Rey, Finn and Poe Dameron.

That and watching a bunch of stormtroopers dance around is all well and good, but the real fun came next. Darth Galactic Empire Lord Palpatine-Sidious kicked off a final segment that found players rushing to grab the latest Fortnite weapon: a lightsaber.

As The Verge notes, there are a bunch of other in-game Star Wars challenges added to the title as part of the promo, but honestly, lightsabers. Just lightsabers. The game now sports a variety of different colors of the iconic kyber crystal-powered weapon, including a crossguard version like the kind sported by Kylo Ren in the new films.

The lead up to the film has seen a slew of different Star Wars add-ons, including skins of Stormtroopers, main characters Rey and Finn and a TIE Interceptor-style glider.