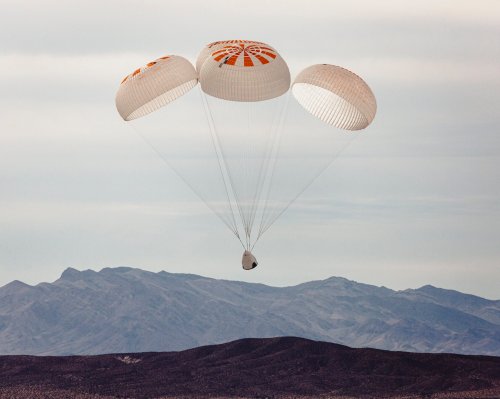 SpaceX is closing out the year with an achievement that should help it keep on track to fly astronauts on board one of its spacecraft next year. The Elon Musk-led space company finished its tenth consecutive successful parachute system test yesterday, an important safety system milestone that should be a good indication that the latest design is just about ready for use with astronauts on board.

The parachute system is what’s used to slow the descent of SpaceX’s Crew Dragon commercial astronaut spacecraft on its return trip to Earth, once it enters the atmosphere. The current design is the third major iteration of SpaceX’s parachute for Crew Dragon, featuring upgraded materials and improved stitching for the best possible reliability and durability during flight.

Earlier this year, at an event hosted at SpaceX HQ in Hawthorne, Calif., Musk told media and fans in attendance that the Mark 3 parachute system would need at least 10 successful tests in a row before the company would feel confident about using it for actual crewed flights. At the time, NASA Administrator Jim Bridenstine also said he believed SpaceX could achieve all 10 before the year was out, and now it has indeed hit that mark.

Currently, SpaceX plans to fly its next major step toward crewed flight on January 11: That’s the current target for its “in-flight abort test,” a required launch that will test the emergency safeguard system that can be triggered mid-launch to carry the crew away from the launch vehicle and to safety in case of anything going wrong that might potentially put them in danger.