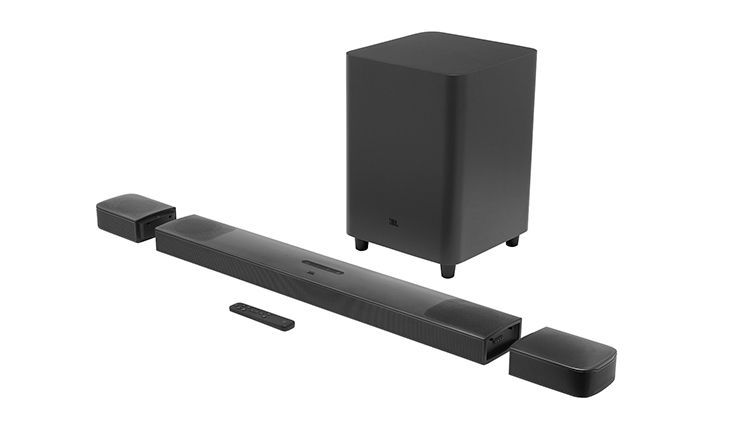 The JBL Bar 5.1 – a transforming soundbar that could charge two detachable battery powered wireless rear speakers for true surround sound – was an underrated highlight of IFA 2017. Now, with CES 2020 opening its doors, JBL has given the concept a Dolby Atmos upgrade.

Offering a 9.1 channel set up, and coming with its own separate 10-inch wireless subwoofer, it’s a 4K HDR compatible bar capable of taking audio streams from Google Chromecast, Apple AirPlay 2 and Bluetooth sources.

It’s the detachable rears that makes this a unique Atmos proposition however – docking them with the main central bar unit allows them to charge, snapping off to be placed elsewhere in a room. Once detached, they automatically assign themselves as rear channels, and are good for 10 hours of playback.

It’ll be music to the ears of anyone that’s tried to wrestle with cabled home cinema systems, leaving wires trailing against skirting boards and behind sofas.

But it won’t come cheaply. You’re looking at a £999.99/$899.99 price tag for the convenience of this versatile soundbar when it launches in the spring.

Still, that’s the price of innovation and, if you’ve been trying to get the best of overhead audio sources like Dolby Atmos, and aspire for the immersion of surround-sound rears, it’s a fantastic-looking solution.