VIZIO 2020 lineup is a march of constant improvement

Everyone is thirsty in the desert. From phones with cameras that disappear to robots that bring you spare rolls of toilet paper to concept cars that breathe, there absolutely is no shortage of products at CES 2020 fighting for even just a brief glimpse of attention.

But you also get the sense that it’s very much business as usual for VIZIO. That in this futuristic world of 8K televisions and modular displays, VIZIO is content to just do its thing. To make good televisions for normals folks at price points normal folks can afford.

But spend even just a few minutes with any of VIZIO new kit and you’ll come away thinking “I want this.” So with the caveat of not knowing just how expensive the top end of things will run, here’s a breakdown of where things stand going into 2020 — and what a steady march of improvement can do in a world in which everyone else is trying to make a bigger splash.

The 2020 line of VIZIO televisions 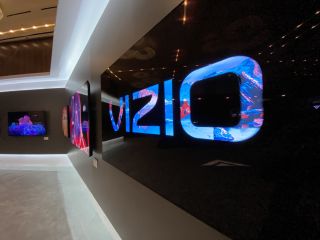 The M-Series is where I’d start looking, though. Televisions are long-term purchases. They’re big and kind of a pain to swap out. So I’d spend a little extra and get a little more for my money.

First is that the industrial design of the M-Series Quantum TVs is better. You’ve got a couple of flavors of the new M-Series from which to choose, with the M8 offering 90 local dimming zones. (More dimming zones means parts of the screen can be darker while other parts are lighter. Having more dimming zones is better.) The M8 also has a high peak brightness, hitting 800 nits.

And don’t expect the price to break the bank here, either.

If you’re really looking to step things up, though, the P-Series is still where it’s at. And there’s a sizable shift in the P-Series itself. The P9 is still a hell of a TV. It’s available in 65 inches or 75 inches, with up to 240 local dimming zones (depending on whether you get the larger of the two models) and peak brightness of up to 1200 nits. The P-Series also ups the processor to the new IQ Ultra scheme.

And VIZIO is going one further. The P-Series Quantum X is available in 65-, 75- and 85-inch models. It has 792 local dimming zones on the large end and take the peak brightness up to 3,000 nits. It’s nuts. It’s gorgeous. It also removes the bezels and does away with the “VIZIO” badge and opts, instead, for just the logo on the bottom right. This is, in all likelihood (again, we don’t have pricing) the upgrade TV to have if you want the upgraded option from VIZIO. 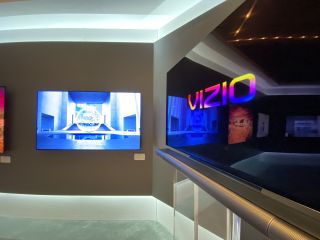 VIZIO new OLED TV provides true blacks. And the stand can be used to mount the new Elevate sound bar. (Image credit: CordCutters)
But it’s still not OLED. And that’s the biggest splash VIZIO has up its sleeves this CES — its first Organic Light Emitting Diode display.

Remember all those local dimming zones we were talking about before? OLED turns off the individual pixels. Black spaces are truly black. That sort of contrast makes the colors pop that much more.

If you can afford an OLED TV, you want an OLED TV. And VIZIO’s will come in either 55 or 65 inches. It really is beautiful.

The inside baseball is that this OLED TV — it doesn’t have a snazzy series name or anything — lets VIZIO more directly compete with the manufacturers that already have been on the OLED train for some time, and it gives it a slight leg up on the less-expensive MicroLED panels you’ll find elsewhere. It fills a hole atop the VIZIO lineup and should give it a pretty consistent contender in all the best-of lists this year.

But the question remains: How much is it going to cost?

Fun, but not actual products yet 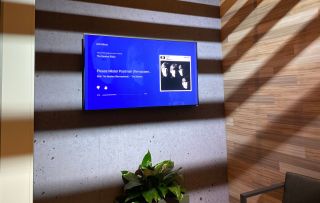 An outdoor TV isn’t yet in VIZIO’s product pipeline, but it’s at least something the company has thought about. (Image credit: CordCutters)
VIZIO had a couple other sets on display that were a sign of what it’s at least playing with, if not actually something it plans to bring to market in the future.

First is an 8K-resolution panel. Companies are always working on everything, and there’s no way VIZIO hasn’t been working on 8K. But there’s also absolutely no reason for a normal consumer to purchase an 8K television, so it’s a nice change of pace to see someone say “Yeah, it’s a thing. But it’s also not a thing, ya know?”

Another thing VIZIO is toying with is a television that’s meant for outdoor spaces. Again, to reiterate, it’s nowhere near a finished product. It has nothing to announce. But what at least sparked a brief moment of excitement was the possibility of a television meant for the outdoors that doesn’t look like was built 15 years ago — bulky and unsightly and something that makes you want to buy a $250 TV and sacrifice it to the Weather Gods every couple of years instead. Which, for what it’s worth, is exactly what I do on my covered porch. So the prospect of something bright enough for outdoors and hardened for the outdoors without possibly — again, that “not-a-thing-yet” caveat — looking like a piece of 1990s military surplus would be a very good thing. 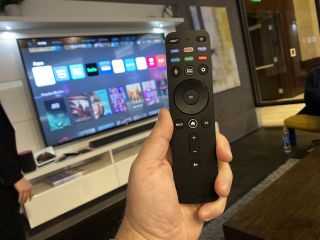 VIZIO has finally redesigned its aging remote control, and it’s added voice commands. (Image credit: CordCutters)
Nothing ruins a good television experience like a bad remote control. And it’s not that VIZIO’s remotes have been bad — they’ve just looked the same for quite some time and also have looked like the’ve been trying too hard.

That’s changing in 2020 with the new VIZIO voice remote. As the name implies, it’s also adding voice control via the remote, which is something that’s been missing. (Support for Amazon Alexa and Google Assistant enabled devices is still there, too.) VIZIO is using SoundHound to crunch all that data in the cloud, and it worked well enough in our demo. And it was nice to see it employ the sort of contextual computation you’d expect to see in 2020, so that you don’t have to explicitly state a question or command one at a time. So you can say “Show me James Bond movies” and it’ll show you James Bond movies. And then you can say “Just the ones with Sean Connery” and it’ll show you the ones with just Sean Connery.” That’s the way things should work.

The remote itself has been greatly simplified, too. No more number buttons, which makes sense for the streaming era. There are a half-dozen branded shortcuts up top, and VIZIO’s own “WatchFree” channel gets prime placement. And after that everything’s where it should be.

Televisions from as far back as 2016 will be updated to VIZIO’s SmartCast 4.0 operating system, and benefit from its speed improvements. (Image credit: CordCutters)
Along with the new hardware for 2020, the other biggest announcement was the next generation of VIZIO’s SmartCast operating system. It’s long been a pain point for VIZIO’s TVs — I’ve had zero problems recommending VIZIO to someone, but always with the caveat that they’d want to invest a few dollars in an Apple TV (my top choice) or Roku streaming player or Amazon Fire TV.

Previous iterations of SmartCast have just been too slow.

I can’t quite tell yet if the new SmartCast 4.0 has done enough to change my mind on that. Our demo was decidedly pre-production, and there were occasional hiccups. But the improvements also were pretty obvious, and VIZIO needs kudos for speeding up its top-level home screen experience. Questions remain, though. How will the third-party apps behave? And will SmartCast have all of the services you want to watch? It’s getting close to having all of the majors, and so maybe 2020 will be the year in which we see VIZIO start to take on Roku in the arena of all-in-one TVs. We’ll just have to see.

But it’s also very much worth noting that VIZIO says to expect the SmartCast update on TVs dating all the way back to 2016. Obviously newer hardware should speed things up that much more, but it’s tough to find any company outside of Apple that keeps its software up to date that long. 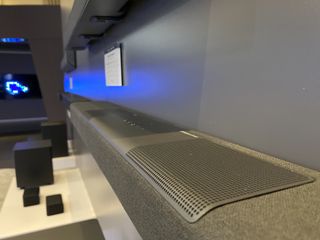 (Image credit: CordCutters)
I’ve long been a fan of VIZIO’s soundbars, too. You can greatly improve the quality (and experience) of your TV viewing with just a few hundred dollars of kit — and having rear speakers and a subwoofer connect wirelessly to a soundbar means your living room doesn’t need to be rewired.

The biggest change for 2020 is a continued improvement in the industrial design. There’s less cloth and more plastic. And everything just looks more sophisticated. The soundbars also have gained better branding, joining the M-Series and V-Series schemes, making it easier to have a general idea of what tier audio equipment you’re looking at. (And it makes keeping track of this sort of thing so much easier.)

And then there’s the new high-end VIZIO Elevate Sound Bar. It’s got Dolby Atmos and DTS:X. And it has speakers that rotate depending on the sound profile. It’s a really cool thing to hear, and sort of space-age to see in practice. And the sound? Spectacular.

Expect VIZIO to also heavily push the Elevate in conjunction with its new OLED TV. So much so, in fact, that should you mount the OLED TV on a wall, the attached stand becomes a mounting point for the Elevate Sound Bar.

VIZIO also has redesigned its audio remote controls, too — casting off another legacy pain point.

We don’t have any pricing here, either, but figure it to be in the affordable-to-wow range again. 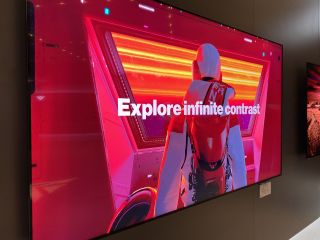 (Image credit: CordCutters)
There is a fair amount of commonality here that I’ve left out. All of the new displays come with 4K resolution and Dolby Vision and HDR10+ and HLG. All of them feature HDMI 2.1 ports, so latency should be lower and the overall experience should be better. Apple’s AirPlay and Homekit are now standard. Same for Alexa enabled devices, Google Assistant integration and Chromecast.

And the M-Series TVs on up feature a ProGraming Engine that allow for a pretty killer experience with an Xbox One X or PlayStation 4. (Or, eventually, the PlayStation 5, we’d gather.) Combine that with VIZIO’s soundbars and you get its take on surround sound that really does take you into the game.

VIZIO’s fine being VIZIO. It’s going to continue to make televisions that are great, and affordable across all kinds of price points.

And they’re going to continue to keep getting better.