The upcoming Samsung Galaxy S20 trio is shaping up to be a killer flagship. However, not much was known about how the top-end S20 Ultra will be better than the other two.

A new report by MySmartPrice suggests that the Samsung Galaxy S20 Ultra will sport a quad-camera array with insane individual cameras. The primary camera will be a custom 108MP image sensor meant exclusively for Samsung (not to be confused with the ISOCELL Bright HMX seen on the Xiaomi Mi Note 10), alongside an ultrawide shooter, a 3D ToF depth sensor and a periscopic camera that can shoot images at up to a 100x hybrid zoom. This will be a big step over the current Huawei P30 Pro’s 50x and the Vivo X30’s 60x zoom modules. 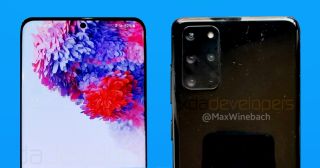 Samsung Galaxy S20+ live images (Image credit: XDA Developers)
The regular S20s will skip the periscopic sensors in favor of a regular telephoto lens. The primary camera will be a new 12MP image sensor with a big 1.8μm pixel size, which will be one of the biggest we’ve seen on a smartphone. A laser could also join the ultrawide and depth-sensing cameras for autofocus.

Other internal specifications are expected to include a Snapdragon 865 or the Exynos 990, based on the region, with a minimum of 12GB of RAM across the board. The storage can also be expected to get a bump up to UFS 3.0. The batteries are expected to be rated at 4,000, 4,500, and 5,000mAh on the Samsung Galaxy S20, S20+, and the S20 Ultra, respectively, with even faster charging than the last generation. Catching up with recent trends, all of them are also said to sport 120Hz displays.

The Samsung Galaxy S20 trio, alongside the Galaxy Z Flip foldable, will be unveiled on February 11, just weeks before MWC 2020. 5G variants of all the phones are also expected, but there are a lot of software-side changes which are still unknown. Samsung’s 2020 flagships already seem formidable and ready for the competition.