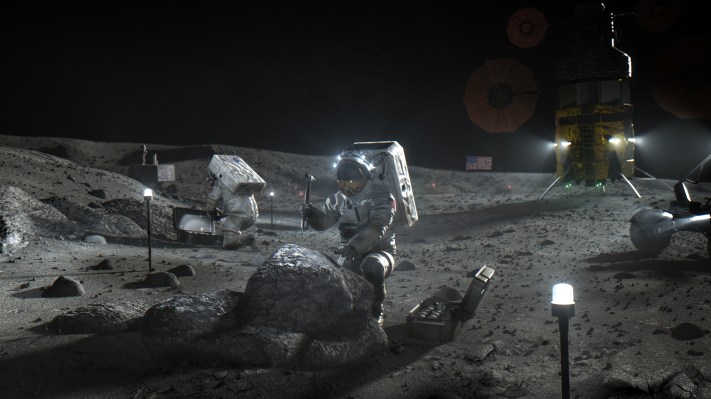 NASA’s plan to return to the Moon is ambitious enough on its own, but the agency is aiming to modernize international cooperation in space in the process. Today it published a summary of the “Artemis Accords,” a new set of voluntary guidelines that partner nations and organizations are invited to join to advance the cause of exploration and industry globally.

Having no national affiliation or sovereignty of its own, space is by definition lawless. So these are not so much space laws as shared priorities given reasonably solid form. Many nations already take part in a variety of agreements and treaties, but the progress of space exploration (and soon, colonization and mining, among other things) has outpaced much of that structure. A fresh coat of paint is overdue and NASA has decided to take up the brush.

The Artemis Accords both reiterate the importance of those old rules and conventions and introduce a handful of new ones. They are only described in general today, as the specifics will likely need to be hashed out in shared talks over months or years.

The NASA statement describing the rules and the reasoning behind each is short and obviously meant to be understood by a lay audience, so you can read through it here. But I’ve condensed the main points into bullets below for more streamlined consumption.

First, the rules that could be considered new. NASA and partner nations agree to:

As you can imagine, each of these opens a new can of worms — what constitutes transparent? What operations must be disclosed, and under what timeline? Who determines what has “historic value”?

Anything arguable will be argued over for a long time, but setting some baseline expectations like “don’t be secretive,” or “don’t steal the Apollo 13 lander” is a great place to start the conversation.

It’s a new dawn for space exploration! Today I’m honored to announce the #Artemis Accords agreements — establishing a shared vision and set of principles for all international partners that join in humanity’s return to the Moon. We go, together: https://t.co/MnnskOqSbU pic.twitter.com/aA3jJbzXv2

Meanwhile, the Accords also reaffirm NASA’s commitment to existing treaties and guidelines. It and partners will:

The Artemis program aims to put the next American man and the first woman on the surface of the Moon in 2024, though that timeline is looking increasingly unlikely. The mission will lean on private launch providers and other commercial partners to an unprecedented degree in an effort to reduce costs and delays while maintaining the necessary levels of reliability and safety.