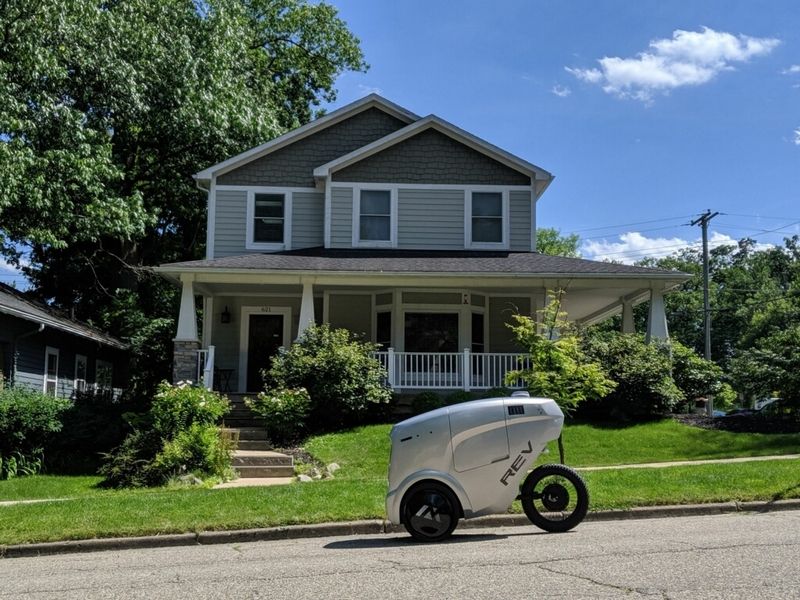 An Ann Arbor robotics startup is expanding into the growing world of grocery delivery.

Customers of The Produce Station grocery store on South State Street in Ann Arbor can now have their items delivered by a REV-1 robot developed by Refraction AI Inc. Since last year, the company has been using its autonomous machines, which weigh about 100 pounds and are about the size of a bicycle, to deliver takeout food from a handful of local restaurants.

The new expansion into grocery delivery was an easy decision in the era of COVID-19 when people are reluctant to go into stores, said Matthew Johnson-Roberson, co-founder and CEO of Refraction AI.

“Particularly with greater awareness around food deserts and our inability to serve underserved communities with food, I think that the ability to get food from grocery stores to people is a thing that we want to make easier, and more importantly, more safe,” he said.

During a time when restaurants in particular have struggled due to monthslong state-mandated closures except for takeout and delivery, Johnson-Rogerson said he hopes that the company’s flat fee to stores will be beneficial. It’s up to stores and restaurants whether to pass along any costs to customers, he said.

The rise of COVID-19 has propelled online grocery sales this year, according to recent reports. Industry trade publication Supermarket News, citing a report from Coresight Research, reported in May that online grocery sales were anticipated to grow by 40 percent in 2020.

Refraction has eight REV-1 delivery robots roving the streets of Ann Arbor. That’s expected to more than triple by Sept. 1, Johnson-Roberson said. As long as streets remain generally clear, the robots — which cruise at 10-15 mph — can navigate a Michigan winter, he said, adding that robots were out delivering last winter with few interruptions.

While the company is focusing on grocery delivery, it’s restaurant delivery that the executive says Refraction is in position to disrupt, particularly in a way that he believes will be beneficial to the establishments.

“I am not sure that the existing model for how restaurants were functioning pre-COVID made a lot of sense in terms of third-party delivery,” he said. “So our hope is that this sort of shows a path forward, that there’s a way of doing it that the restaurant makes money, that we make money, and at the end of the day consumers get to eat the food they want to eat.”

Orders can be placed at revfood.com/prodstation.