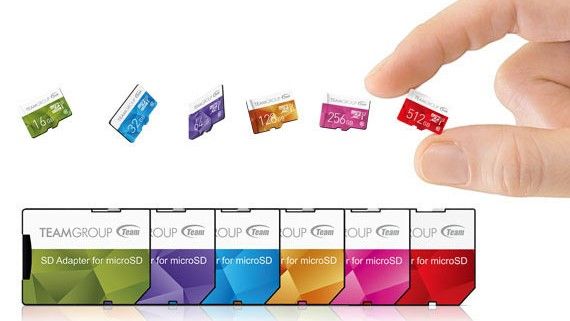 We have waited, and waited for more 1TB microSD cards to appear on the market and apart from the lonely SanDisk 1TB Extreme MicroSDXC UHS-I microSD card, we have yet to see others step in (Micron, we’re looking at you).

In the meantime, more vendors have been releasing 512GB microSD cards and have caused prices to drop quite significantly. One in particular, Teamgroup, has two of the cheapest microSD cards of this capacity at Amazon and Newegg.

The first one, the 512GB Go Card ($65.99) is specifically designed for action cameras (like the popular GoPro) and supports 4K shooting and delivers read/write speeds of up to 90MBps and 45MBps (UHS-I U3). Adequate without being spectacular. Known as the TGUSDX512GU303, it is built for use and to last in extreme environments offering waterproof, dustproof, x-ray proof and cold resistant protections.

The second card is the Color, which is also a UHS-1 model with a slightly lower read and a much worse write performance (80MBps and 20MBps) costs $64.99 at Newegg. We’d rather spend an extra $1 to get the superior Go card but every cent helps.

At $126.94 per TB, it is about half the price per capacity of the Sandisk 1TB microSD card but there are far, far cheaper options if you want to go 256GB or lower; more on that next week. Teamgroup claims that it has adopted new printing technology to fulfill the goal of being an eco-friendly product; the cards come with lifetime warranty and free technical support.