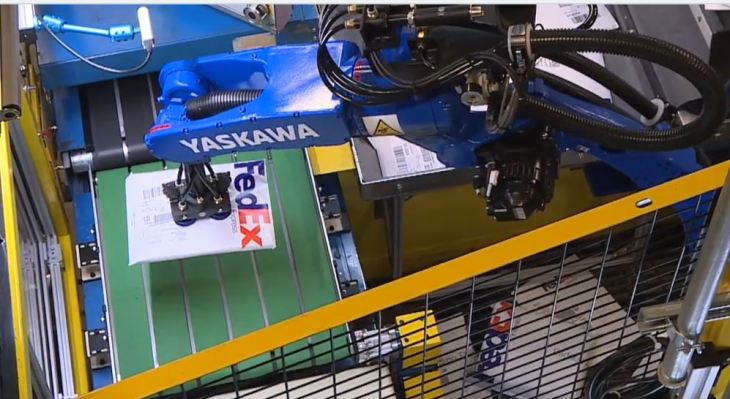 FedEx has flirted with robotic technologies before, most notably in the case of Roxo. The delivery robot made its debut in New York City last year, only to get the boot from Mayor Bill de Blasio. These days, however, the prospect of increased automation seems all the more pressing, as COVID-19 has left many reconsidering the human element of the supply chain.

The logistics giant reached out to TechCrunch this week to note that it has been using robots in another matter for a few months now. In May, FedEx installed a quartet of robotic arms from Yaskawa America and Plus One, with the express intent of helping sort the massive numbers of parcels that pass through its Memphis facility.

For reasons that should be clear to anyone who follows the category, human workers still play a key role in the process. The company says several members of its Small Package Sort System team — who previously did the sorting themselves — are operating as supervisors for the new robotic employees.

FedEx says it was actively exploring these technologies prior to COVID-10. “While COVID has not directly played a role in accelerating the tech adoption,” the company tells TechCrunch, “it has exponentially increased the amount of e-commerce packages traveling through the Memphis hub, so COVID has validated the need for this technology and its support for our team members working at the Memphis hub.”

The industry has, after all, been moving in this direction for some time. Amazon, which has made massive investments in and acquisitions of several robotics firms, is probably the best existing model for how humans and robotics can work side by side to process massive volumes of parcels. UPS, too, has looked increasingly toward automation. Last year it announced a goal of processing 80% of packages through automated facilities. With a massive ongoing health crisis like COVID-19 posing a risk to workers and customers alike, additional automation seems like a no-brainer for many such outfits.

To date, FedEx says it has not made any investment in robotics companies.