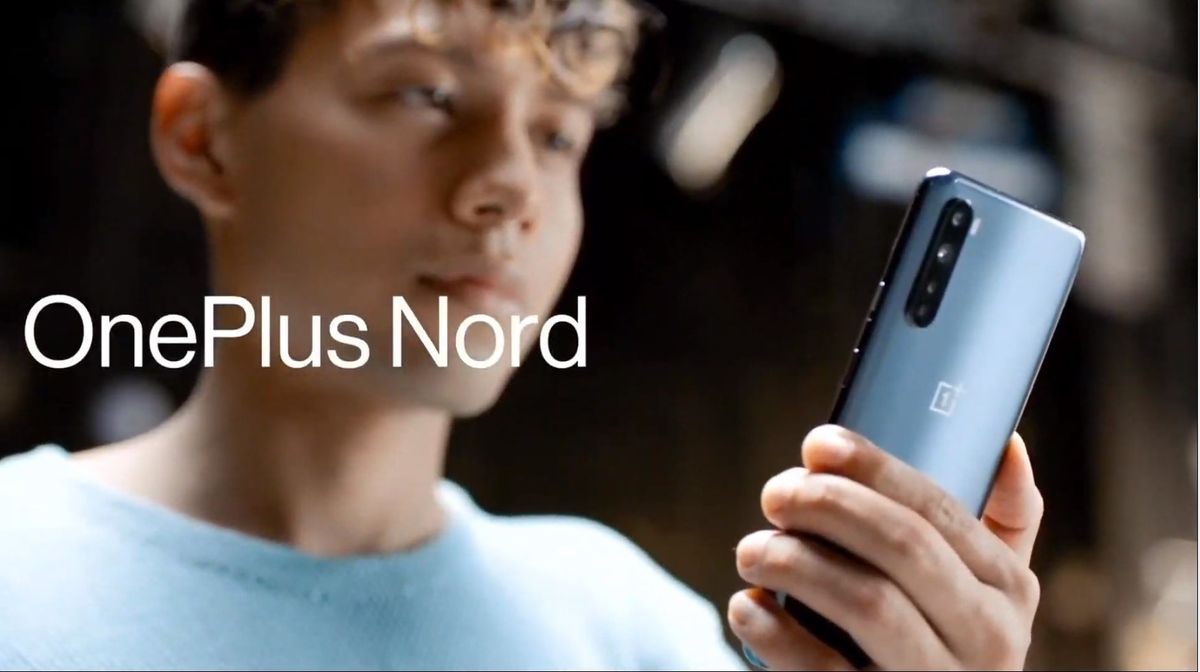 No, you’re not experiencing déjà vu. The OnePlus 8 and OnePlus 8 Pro were only unveiled a few months ago, but the company has already announced its new phone: the OnePlus Nord.

This is the first in a new line of devices, and they’ll be more affordable than its flagship phones. The big unveiling was has happened, so the bad news is that you’ve missed it live.

The good news is you’re now able to catch up with the event as it happened using our live blog below. The even better news is that we have used the OnePlus Nord, and you can read all about our time with the phone using the link just below.
All times in British Standard Time (BST)
15:28 – And we’re live with our first look at the OnePlus Nord. We’ve been able to test out the phone ahead of today’s big launch, and you can find all of our opinions about the new handset using the link below.
15:26 – Thanks for bearing with us there as that was a bit of a different event to what we’re used to.

Below you can see the pricing for the OnePlus Buds as well:

15:23 – If you live in India, you’ll be able to buy the phone directly from Amazon and OnePlus for ₹25,000. There are other versions of the phone that are set to cost more than that though.

Those in the UK will be able to buy the phone from August 4 where it’ll start at £379. That’s a very impressive price for a phone of this type, and the company has yet to confirm the exact pricing for other versions of the device.

OnePlus doesn’t seem to be bringing this phone to the US. It has previously said it may bring the device to the US if it sells well in markets like India and the UK, but the company didn’t even comment on a US release today.

15:21 – We’re now waiting for 30 seconds to find out how much the OnePlus Nord is going to cost. If you’re inside the app, it wants you to guess directly. Hopefully you win a phone if you get the answer right? Who knows?

15:19 – 30 hours of battery life is confirmed for the OnePlus Buds (that’s including the charging case) which is quite impressed considering the rest of the market. The company has also included its same fast-charging tech in the headphones case as well.

15:17 – Now, OnePlus is talking about its headphones. We’ve now got an advert about the OnePlus Buds, which are the company’s new true wireless headphones to compete with the likes of Apple AirPods.

From this short trailer they have environmental noise cancelling and come in either black, blue or white. There’s a pebble-like charging case, and these are set to be the sequel to the company’s Bullets series.

15:13 – Onto the camera, and you’ve got a main 48MP rear camera on the Nord. There’s also a ultra-wide camera that’s 8MP and a macro sensor on the rear of the phone as well.

We missed a few of the specs during the live stream there, but we’ll be sure to run through them all toward the end of the event as the camera is one of the big focuses of this smartphone.

15:12 – OnePlus is making a big deal out of the 90Hz display, and this writer agrees that it is difficult to go back once you’ve used a high refresh rate display. This may mean you’ll be able to switch from a phone like the OnePlus 7 Pro with its 90Hz display to this new phone.

There’s also 12GB of RAM, which sounds like it may be a bit of overkill for a phone with a mid-range chipset inside.

15:09 – Colors are blue or black, and there’s a 6.44-inch display on the front. The company has yet to confirm the exact resolution of the screen for now. It’s also a 5G phone, which is likely to make it one of the most affordable 5G phones on the market.

15:07 – The phone is here, and we’ve seen a variety of specs flutter around the screen. We’ve now entered a more standard video introduction to the OnePlus Nord, which is the sort of trailer you’d expect to see on TV.

There’s a Snapdragon 765 processor inside, and the fast-charging tech is back for this phone. OnePlus is also including a 90Hz display on the phone as well.

15:06 – Six cameras are confirmed, which is one of the few things we weren’t 100% certain on before entering this launch. The tagline for this phone is “pretty much everything you could ask for”.

15:05 – Camera, smooth experience and quality are the three elements that OnePlus wants this phone to focus on. Of course, price should also be in that mix as well.

You’ll need to download the app for that, and you’ll be able to find out how to do that here.

15:01 – We’re now being treated to a video about what “the future” is. We’ve seen clips of Big Ben in London at midnight, and Black Friday clips. This looks like more of a Black Mirror opening that a video clip for a phone launch so far.

14:59 – One minute to go. This is going to be a bit of a strange one to live blog, so please bear with us as we try to keep up with the augmented reality elements of the launch. Let’s get started!

That shows that a lot of people haven’t downloaded the app directly and would prefer a traditional stream, but many will be excited for this unique approach to unveiling a new phone.

14:55 – The video is now looping so if you want to watch it for yourself you’ll find it on the augmented reality app. That may be a little late to download that now, so instead you’ll find the video link below to watch it live along with us.

14:52 – We’re seeing a pre launch video from OnePlus about the development process of the new phone. Someone in the clip claiming the device was developed in six months, which is quite remarkable considering a lot of phones take years to produce.

We’ve yet to see the actual peek at the device yet, and we’ll be sharing that as soon as we see it.

14:50 – A weird wrinkle to the OnePlus Nord launch is the fact that Unbox Therapy – a popular tech YouTuber – is hosting the launch on his channel rather than the company having a specific live stream.

If you want to watch it without the AR experience, you’ll be using the video you can find below. The stream is also claiming to have a quick peek at the device ahead of the launch, and we’ll be sure to share that here when it happens.

14:45 – So why is it called the OnePlus Nord? We’ve asked OnePlus directly, and we’ve got a piece explaining exactly what the name means and why it opted for that rather than OnePlus 8 Lite or OnePlus Z.
14:37 – How do you feel about the augmented reality gimmick of this launch? Will you just be watching the standard livestream from OnePlus? TechRadar’s Deputy Editor, John McCann, has some strong feelings about the AR launch:
14:25 – Why is today’s launch so early in the day? If you’re interested in OnePlus but you live on the West Coast of the US, you’ll be getting up at 7am to be able to tune in.

That’s because Europe and India are the big markets for the OnePlus Nord. The device has already been up for pre-order in those markets, and there’s no clear definition from OnePlus on whether it’ll come to the US at all.

We’re hoping to learn a lot more about that today, but there’s no gurantee the company will comment on this.

14:20 – OnePlus clearly know that the price is the most exciting element of today’s launch. It’s one of the few things that hasn’t been revealed through the consistent confirmations directly from the company and a variety of other leaks over the last few weeks.

In around half an hour’s time, we should start to hear more about the OnePlus Nord but we wouldn’t expect to see the price until toward the end of the event.

14:05 – Less than an hour until we see the OnePlus Nord unveiled on stage, so you’re likely waiting to see how you can tune in. If you want to watch live you can use this guide here on how to watch the launch, but we’d recommend following along here too.
13:30 – Carl Pei from OnePlus is awake and ready for today’s launch. It’s not clear if today’s launch will be live or pre-recorded, but we’d expect the latter so it can be an augmented reality event.

According to Pei’s tweets, the company has had a turbulent few days internally.

12:35 – It isn’t just the OnePlus Nord that is being unveiled today. It’s very likely the company is going to unveil its new true wireless headphones, which are called the OnePlus Buds.

Home Entertainment writer for TechRadar, Henry St Leger, says, “The OnePlus Buds were pretty inevitable, and it may be they simply offer a true wireless replacement for the Bullets Wireless range rather than really disrupting the true wireless audio market.

“The rumored long battery life is a good start, though, and OnePlus has a history of surprising us, so the Buds could certainly make an impact.”

We’ve even seen pictures of the handset – like the one at the top of this article, and down below – so it’s more details such as the price, release date and other products around the outside. Below are a few things we expect to learn for the first time today.

10:50 – So the unique selling point of today’s launch is that it’s all taking place in augmented reality. There’s a specific app you can download from OnePlus that allows you to do this.

The company is also hosting a live stream if your phone isn’t capable of running the app or you don’t want the novelty of the app to be watching it.

09:15 – We originally heard this phone talked about as the OnePlus 8 Lite. It was rumored to drop alongside the flagship phones that were announced in April this year, but instead the company has spun the Nord out as a separate line of devices.

What are we expecting to see unveiled today? So far, the rumors suggest we’ll see two devices:

08:50 – Excited for the OnePlus Nord? You may even have already pre-ordered the phone, but today is when we’ll hear all the key details about it, as well as getting a proper first look at the design.

OnePlus has chosen to tease elements of the phone over the last few months, so we already know a lot – you can click the link below to learn everything we know about the phone so far. Today is when we’ll learn everything else though – and there are a few important things we don’t know yet.