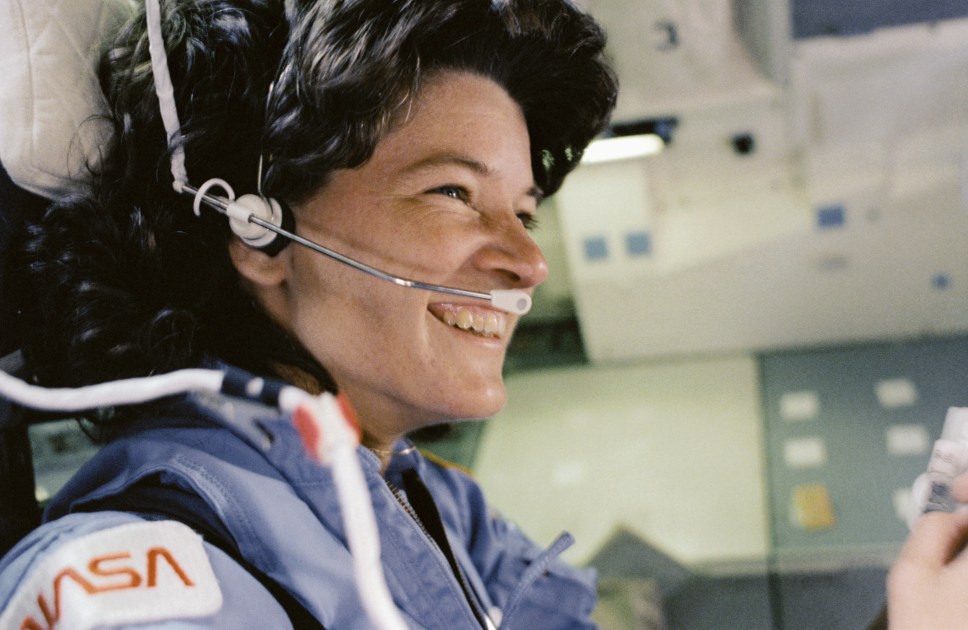 On February 2, 1960, Look magazine ran a cover story that asked “Should a Girl Be First in Space?” It was a sensational headline representing an audacious idea at the time. And, as we all know, the proposal fell short. In 1961, NASA sent Alan Shepard above the stratosphere, followed by dozens of other American spacemen over the next two decades. Only in 1983 did Sally Ride become America’s first woman to launch. A certain kind of person might be compelled to ask, why would anyone think a woman should be the first to space, anyway? And to this person I would say, expert medical opinion, for starters.

Women have fewer heart attacks than men, and in the 1950s and ’60s, scientists speculated that their reproductive systems were more protected from radiation from space than men’s because they are on the inside. What’s more, psychological studies suggested that women cope better than men in isolation and when deprived of sensory inputs. But there was another, possibly more compelling reason that women might outshine men as potential astronauts: basic economics. Thanks to their size, women are, on average, cheaper to launch and fly than men for the simple fact that they need less food.

I verified this firsthand. During the mission, part of my job was to collect and manage the crew’s sleep data. One device used to track sleep was a sensor armband, which, in addition to sleep data and activity logging, also estimated daily and weekly calorie expenditure.

Every week, sitting at the table where we ate our meals, I’d dump the sensor data into my computer. While I didn’t know which numbers belonged to which subject, due to anonymity requirements, I could see each subject’s F or M. Over time I noticed a trend. Sian, Yajaira, and I consistently used fewer than half the calories of Angelo, Simon, and Oleg. Fewer than half!

We were all exercising roughly the same amount—at least forty-five minutes a day for five consecutive days as per our exercise protocol, most of us ardent followers of Tony Horton’s P90X workouts—but our metabolic furnaces were calibrated in radically different ways.

Another observation: at mealtime, Sian, Yajaira, and I took smaller portions than Angelo, Simon, and Oleg, all three of whom often went back for seconds. I also remember that one of the guys complained how hard it was to maintain his weight, despite the piles of food he was eating. It all got me thinking about economics and gravity.

Astronauts’ calorie requirements matter when planning a mission. The more food a person needs to maintain their weight on a long space journey, the more food should be launched with them. The more food launched, the heavier the payload. The heavier the payload, the more fuel required to blast it into orbit and beyond. Further, the more fuel required, the heavier the whole rocket becomes which, in turn, requires more fuel to launch. This means every pound counts on the way to space. A conundrum, but a predictable one, thanks to math. The “rocket equation” was first derived by a British mathematician in 1813, and later independently discovered again— and applied to hypothetical space travel—by the Russian scientist Konstantin Tsiolkovsky in 1903. It’s the equation that guides all decisions around how heavy payloads, and even rockets themselves, can be.

A mission to Mars crewed only with women would, on average, require less than half the food mass of a mission crewed only with men. But in any scenario, the more women you fly, the less food you need. You save mass, fuel, and money.

When I mentioned my proposal at dinner one night, one of my male crewmates grumpily dismissed it. I figured I was onto something.

Our selection for HI-SEAS and the supplies we brought into that dome, including food, had nothing to do with the rocket equation. And of course the question of female astronaut suitability had long been answered. This meant that we were chosen, more or less, in the same way all NASA astronauts are chosen. Fundamentally, they must have the same baseline: be a documented U.S. citizen with at least a bachelor’s degree in science, math, or engineering and have worked at least three years in their field or have flown at least one thousand hours as a jet pilot.

These requirements might make sense to you. It’s a technical job. Potential astronauts should have proven their rationality and ability to handle the rigors of a machine dominated environment. This kind of educational prerequisite is a shorthand that says yes they can. But I’ve often wondered about all the people who might have made very fine astronauts—car mechanics, inventors, oil-rig workers, sculptors, clergy, EMTs, truck drivers, novelists, designers, plumbers, philosophers—who never got a chance. What would the history of spaceflight have looked like if it wasn’t just formally educated scientists, engineers, and pilots invited to the party?

In any case, I was qualified, but barely. My undergraduate degree is in chemistry, and I have a master’s degree in physics. And though I never worked as a physicist after graduate school—I went straight to science journalism—I did take three years to complete my master’s rather than the usual two because, as a chemistry major, I needed to make up some undergraduate physics courses. I don’t know if the HI-SEAS selection committee considered journalism as relevant experience in addition to my three years in graduate school.

In 2015, NASA put out a call for astronauts, and I thought I might as well give it one last shot. I didn’t make it past the first round. It made me wonder if the agency or, more specifically, the algorithm programmed by those at the agency to sort through the 18,300 applications, a flood three times the size of the previous hiring round in 2011, operates with a fairly narrow definition of professional astronaut experience so that a journalist—even one with a background in science and time on “Mars”—would always be a no-go.

The group that came out the other end of NASA’s hiring process two years later was made up of five women and seven men. Most had flight time, many in some branch of the military. Some were scientists, some were doctors, all seemed to be firing on all cylinders and had been for much of their young lives. Reading through their bios, what I read was ambition, and a lot of it. And it wasn’t the usual American kind, either, that ambition for money. After all, the most financially hungry among us rarely go into science. Fewer still join the military. It’s a different kind of ambition that propels people to NASA, something to do with glory, maybe, or perhaps a sense of something to prove, though I’m sure it’s different for everyone. And while NASA pulls from the military, and the military often pulls from particular segments of the country’s population, I couldn’t help but think, looking at those bios, of James Baldwin’s observation that ambition isn’t equally distributed in America. In addressing his nephew in The Fire Next Time, Baldwin writes, “You were not expected to aspire to excellence: you were expected to make peace with mediocrity.” This was what it was to be black and born in Harlem, Baldwin writes in 1962. This sentiment, and the rightful anger behind it, also may apply to many other nonwhite Americans in other cities and rural towns today, to those born in poverty, to those who lack documentation. There are so many excellent people in this country, living now and throughout history, who have had their ambitions blunted before they could even get started, who have been told that they are not what America is looking for. What of the almost-astronauts or those who never even thought to give it a try? What might they have contributed to humanity’s grand space endeavor? How might they have shaped it differently, for everyone?