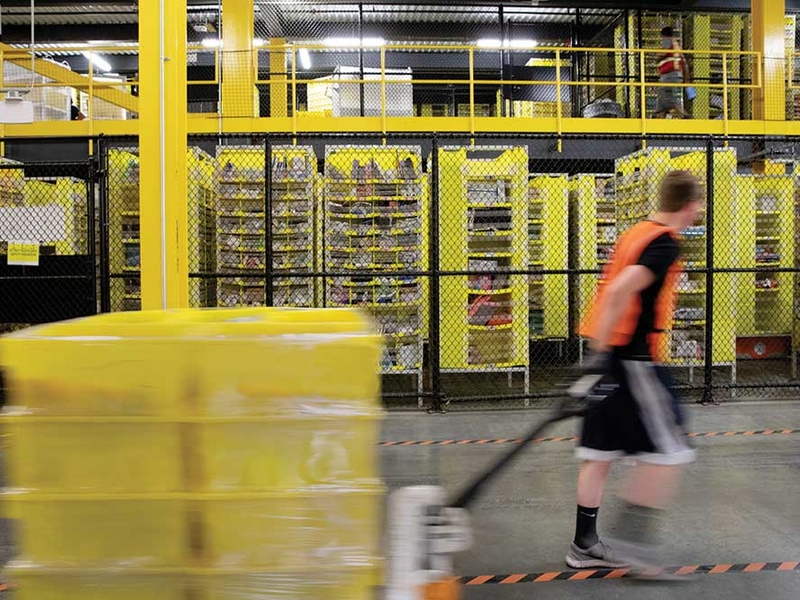 As it tries to keep up with surging online orders from consumers, Amazon is delivering big-time for two other groups: industrial developers and unemployed workers.

The Seattle-based e-commerce giant has emerged as the Chicago economy’s biggest growth engine this year, providing a much-needed lift amid a global pandemic that has devastated local businesses and put thousands of people out of work. Amazon has leased local warehouses totaling 14.2 million square feet this year—more than three Willis Towers combined—with plans to hire as many as 15,000 people to work in them.

Amazon, which began building out its distribution network here about six years ago, has been expanding feverishly this year, cutting deals for warehouses in suburbs like Downers Grove, Palatine and University Park and in Chicago neighborhoods like Pullman and Bridgeport. In June, the company unveiled plans for two 3.8 million-square-foot fulfillment centers in south suburban Matteson and Markham that will employ 2,000 people.

“It is transformational,” says Markham Mayor Roger Agpawa. “Nothing has been bigger in Markham since the Canterbury (Plaza) shopping center was built in the 1960s.”

With a local unemployment rate exceeding 15 percent, Amazon’s timing couldn’t be better for idled workers looking for a job and local governments scrounging for tax dollars. It’s also good for the company itself.

“A year ago, they would have had a hard time finding that labor,” says Craig Hurvitz, vice president of market research in the Rosemont office of brokerage Colliers International. “But right now, it’s kind of a different story.”

Not everyone is rolling out the welcome mat for Amazon. Company critics worry about trucks from its warehouses clogging traffic and polluting the air, and say its jobs aren’t good enough, adding to the broader debate about Amazon’s increasingly powerful role in our economy and society. Local activists oppose a plan for a 112,000-square-foot Amazon delivery station on a riverside site in Bridgeport, contending it would result in more diesel exhaust and congestion in the neighborhood.

“More thought should be given to the health effects on our community,” says Lydia Arroyo, chair of the Southwest Environmental Alliance, a Chicago advocacy group.

Most politicians are so focused on jobs that they’re willing to make the trade-off. Some dangle tax-increment financing or other incentives to attract Amazon. But longtime Bolingbrook Mayor Roger Claar surprised many observers in February when he rejected Amazon’s plan for a massive fulfillment center in the village that would have employed 1,500 people.

Acting Mayor Mary Alexander Basta, who succeeded Claar after he retired last month, doesn’t sound much different. The warehouse, proposed for the site of the former Old Chicago amusement park, would choke a nearby intersection on Interstate 55, Basta says. And she doubts Amazon would pay enough or offer sufficient benefits.

“I don’t think they’re good jobs for the community,” Basta says, noting that she has yet to meet with Amazon representatives or review any proposal from the company.

Amazon declines to make an executive available for an interview. For jobs at its new warehouses, the company advertises a $15-per-hour starting wage for new employees, along with medical, dental and vision insurance. It also offers a 50 percent match of employees’ 401(k) plan contributions starting with their first paycheck, and up to 20 weeks of parental leave.

“They’ve been a good corporate citizen, so we’re glad they’re here,” says John Antaramian, mayor of Kenosha, where Amazon has opened three warehouses, its first in 2015. “I have not seen any major downside.”

Most of Amazon’s warehouse jobs require physical labor and few skills, with many workers pulling products from shelves and packing them for shipment. They’re not as good as the unionized jobs in Chicago’s steel factories three or four decades ago, but they’re better than today’s retail, restaurant or other service jobs, says David Doig, president of Chicago Neighborhood Initiatives, a nonprofit developer with a project in Pullman where Amazon is opening a warehouse this fall.

Amazon also is hiring people to drive its trucks and delivery vans, with plans to recruit employees through Olive-Harvey College in Pullman, which offers a commercial-driving program, Doig says. The company is also investing heavily in electric vehicles.

“Maybe the folks in Bolingbrook can be a little more choosy, but in the areas that need it, like the south suburbs, they’re thrilled” to have Amazon, he says.

More than 23,000 people in Illinois work for Amazon on a full- or part-time basis, according to the company. That includes employees at Whole Foods Market, which Amazon acquired in 2017. In a conference call with local developers, an Amazon executive said the company plans to hire an additional 15,000 here, says Doig, who was on the call.

Though the coronavirus pandemic has crushed many brick-and-mortar retailers, it has boosted Amazon’s sales and stock price, as housebound consumers buy more stuff online. After the company reported its best quarter ever last month, its chief financial officer, Brian Olsavsky, said Amazon was running out of warehouse space and would increase its total square footage by 50 percent this year.

Amazon is the main reason the local industrial real estate market hasn’t cratered like other property sectors have. Amazon accounted for 51 percent of new industrial leasing volume in the Chicago area in the second quarter, according to Colliers. The local industrial vacancy rate still rose in the quarter, to 6.42 percent, from 6.16 percent in the first three months of the year. It would have jumped a lot more without Amazon.

“They’re carrying us through this downturn,” Hurvitz says.

It doesn’t feel like a downturn in Channahon, just southwest of Joliet, where Amazon has begun hiring more than 1,000 full-time workers at a new 1.1 million-square-foot fulfillment center expected to open next month. It’s also hiring at a new 750,000-square-foot warehouse next door.

Amazon’s arrival came with a price. Infrastructure improvements for the project, including new traffic signals, wider roads and water connections, totaled $14 million, to be paid for by future property taxes on the site, says Channahon Mayor Missey Moorman Schumacher.

But she’s counting on a payback in extra sales and real estate tax revenue for local governments, including school districts. With Channahon’s small population—about 13,500—Schumacher expects Amazon to hire many of its employees from outside the community.

“The sheer numbers are staggering,” she says. “We’re pretty excited about the whole thing.”