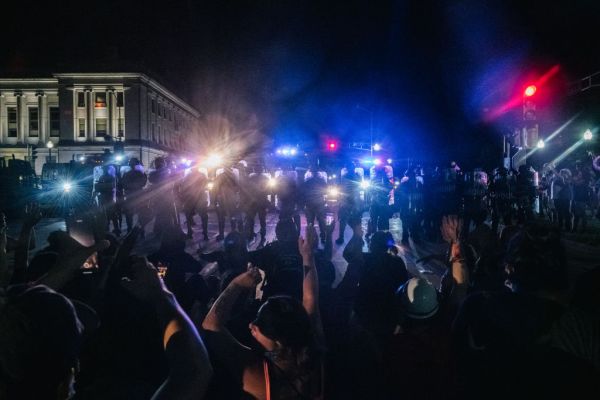 Facebook has removed a local self-declared militia’s page and a related event following the events that unfolded last night in Kenosha, Wisconsin.

Two people were killed and another was wounded when a man believed to be 17-year-old Kyle Rittenhouse allegedly began firing on a group protesting the police shooting of Jacob Blake, a Black man shot in the back while walking away from officers and approaching his car. Rittenhouse was arrested Wednesday in Antioch, Illinois and charged with first-degree intentional homicide.

A series of videos from the night depict law enforcement officers at the protest having friendly conversations with a group of men carrying guns, even offering them bottled water and expressing appreciation for their presence. Rittenhouse appears to have been among the armed group at the protest who said they were attending to protect property. How the armed counter-demonstrators organized their presence and what groups they are affiliated with has not yet been reported.

Prior to the night’s events, a Facebook account called Kenosha Guard published an event to gather “armed citizens to protect our lives and property.” According to the Milwaukee Journal Sentinel, a post by the now-removed account attempted to rally “patriots willing to take up arms and defend [our] City tonight from the evil thugs.”

Two different Facebook users reported the Kenosha Guard account last night before the shooting took place, but in both cases Facebook determined the event and account were not in violation of its policies, the Verge reported.

In a statement to TechCrunch, Facebook said that it removed the group, the event page and the suspected shooter’s accounts on Facebook and Instagram. The company did not find a connection between Rittenhouse’s own account and the Kenosha Guard page.

“At this time, we have not found evidence on Facebook that suggests the shooter followed the Kenosha Guard Page or that he was invited on the Event Page they organized,” a Facebook spokesperson said.

“However, the Kenosha Guard Page and their Event Page violated our new policy addressing militia organizations and have been removed on that basis.”

Facebook is currently monitoring its platform for content praising the shooting and plans to remove anything that meets its threshold for inciting serious violence.