The targeting system is designed to help personnel parse through mountains of information quickly to identify objects of interest. 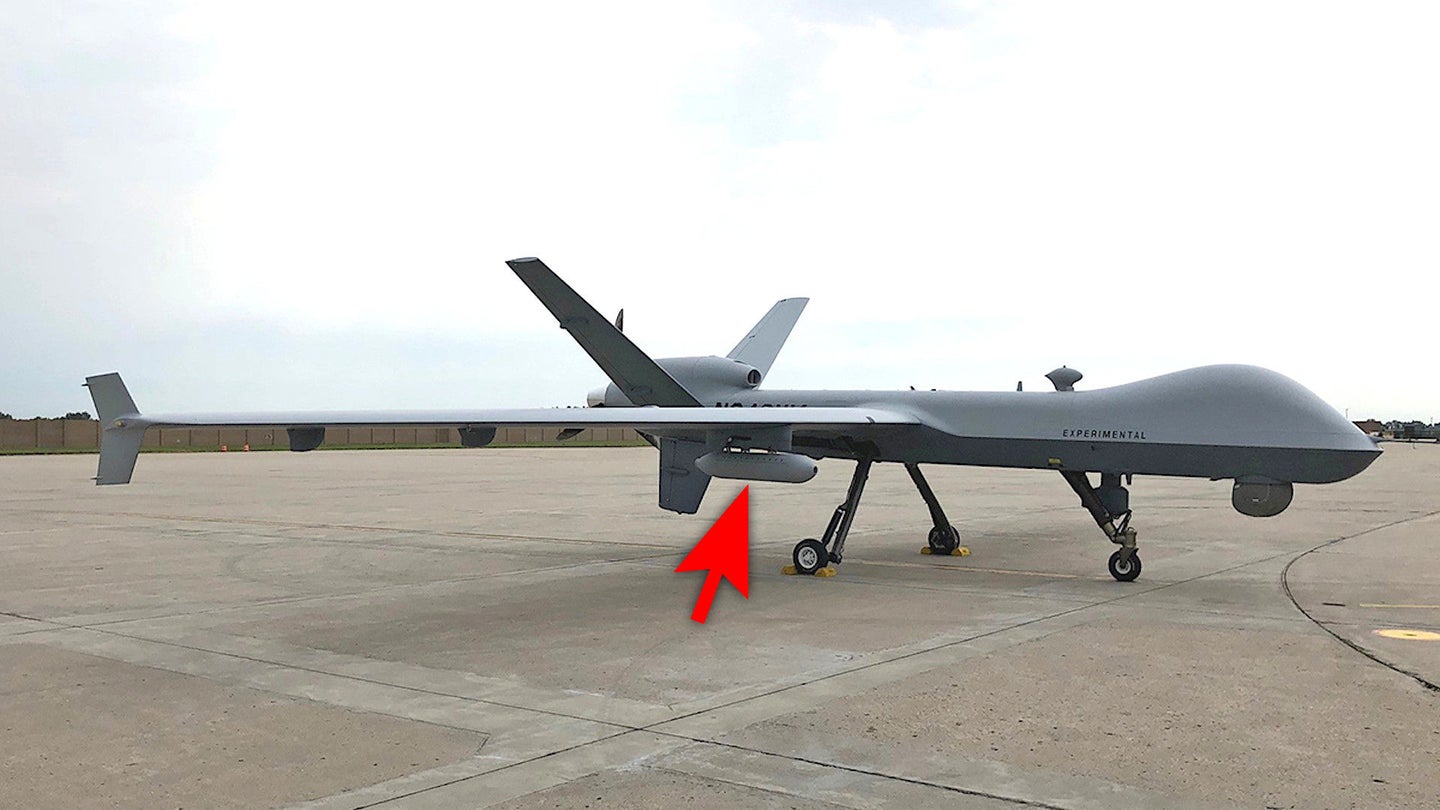 General Atomics
General Atomics says that it has successfully integrated and flight-tested Agile Condor, a podded, artificial intelligence-driven targeting computer, on its MQ-9 Reaper drone as part of a technology demonstration effort for the U.S. Air Force. The system is designed to automatically detect, categorize, and track potential items of interest. It could be an important stepping stone to giving various types of unmanned, as well as manned aircraft, the ability to autonomously identify potential targets, and determine which ones might be higher priority threats, among other capabilities.

The California-headquartered drone maker announced the Agile Condor tests on Sept. 3, 2020, but did not say when they had taken place. The Reaper with the pod attached conducted the flight testing from General Atomics Aeronautical Systems, Inc.’s (GS-ASI) Flight Test and Training Center in Grand Forks, North Dakota.

“Computing at the edge has tremendous implications for future unmanned systems,” GA-ASI President David R. Alexander said in a statement. “GA-ASI is committed to expanding artificial intelligence capabilities on unmanned systems and the Agile Condor capability is proof positive that we can accurately and effectively shorten the observe, orient, decide and act cycle to achieve information superiority. GA-ASI is excited to continue working with AFRL [Air Force Research Laboratory] to advance artificial intelligence technologies that will lead to increased autonomous mission capabilities.”

Defense contractor SRC, Inc. developed the Agile Condor system for the Air Force Research Laboratory (AFRL), delivering the first pod in 2016. It’s not clear whether the Air Force conducted any flight testing of the system on other platforms before hiring General Atomics to integrate it onto the Reaper in 2019. The service had previously said that it expected to take the initial pod aloft in some fashion before the end of 2016.

“Sensors have rapidly increased in fidelity, and are now able to collect vast quantities of data, which must be analyzed promptly to provide mission critical information,” an SRC white paper on Agile Condor from 2018 explains. “Stored data [physically on a drone] … creates an unacceptable latency between data collection and analysis, as operators must wait for the RPA [remotely piloted aircraft] to return to base to review time sensitive data.”

“In-mission data transfers, by contrast, can provide data more quickly, but this method requires more power and available bandwidth to send data,” the white paper continues. “Bandwidth limits result in slower downloads of large data files, a clogged communications link and increased latency that could allow potential changes in intel between data collection and analysis. The quantities of data being collected are also so vast, that analysts are unable to fully review the data received to ensure actionable information is obtained.”

This is all particularly true for drones equipped with wide-area persistent surveillance systems, such as the Air Force’s Gorgon Stare system, which you can read about in more detail here, that grab immense amounts of imagery that can be overwhelming for sensor operators and intelligence analysts to scour through. Agile Condor is designed to parse through the sensor data a drone collects first, spotting and classifying objects of interest and then highlighting them for operators back at a control center or personnel receiving information at other remote locations for further analysis. Agile Condor would simply discard “empty” imagery and other data that shows nothing it deems useful, not even bothering to forward that on.

“This selective ‘detect and notify’ process frees up bandwidth and increases transfer speeds, while reducing latency between data collection and analysis,” SRC’s 2018 white paper says. “Real time pre-processing of data with the Agile Condor system also ensures that all data collected is reviewed quickly, increasing the speed and effectiveness with which operators are notified of actionable information.”

At least at present, the general idea is still to have a human operator in the ‘kill chain’ making decisions about how to act on such information, including whether or not to initiate a lethal strike. The Air Force has been emphatic about ensuring that there will be an actual person in the loop at all times, no matter how autonomous a drone or other unmanned vehicle may be in the future.

Still, developments such as Agile Condor will significantly reduce the amount of necessary human interaction in various parts of the targeting process, as well as general intelligence collection and initial analysis, and potentially much more, as time goes on. It could also fuse various forms of sensor data and other available intelligence together to specifically weight possible areas of interest over others and prioritize certain targets. The Air Force has also said that this system could use these capabilities to enable drones to navigate and detect and avoid potential threats automatically, including at times when its links to a control center or the GPS satellite navigation system are disrupted or blocked entirely.

Agile Condor is hardly the first project the Air Force, or the U.S. military, as a whole, has initiated looking for ways to streamline these processes. One of the best known of these efforts is Project Maven, which has also focused on using artificial intelligence (AI) to parse through mountains of persistent surveillance imagery to rapidly identify useful pieces and information. This now a push to take technology developed under that effort and leverage it elsewhere across the U.S. military.

The actual Agile Condor technology inside the pod is designed to be as lightweight as possible and use modular and open-architecture design elements to make it easy to add in new and improved functionality and capabilities in the future. While it has been flight tested on the Reaper, it’s not hard to see how the technology could be applicable to any other unmanned aircraft capable of carrying it, as well as manned platforms, where the system could assist onboard human sensor operators and analysts. There are already programs in the works to develop AI “copilots” that can provide various kinds of assistance to the crews of manned fixed-wing aircraft and helicopters. It’s also very possible that the technology could have naval and ground-based applications, as well.

All told, Agile Condor is just another example of a broader push across the U.S. military to leverage AI and machine learning to improve autonomous capabilities across the board. The Air Force in particular has a number of publicly acknowledged autonomous unmanned aircraft programs ongoing now, the most notable of which is Skyborg, an effort seeking to develop a suite of systems able to autonomously operate drones in the loyal wingmen role supporting manned aircraft, as well as part of fully independent swarms. This technology could even potentially go into a fully autonomous unmanned combat air vehicle (UCAV).

At the same time, the Air Force is looking to hold a mock dogfight between an autonomous unmanned aircraft and a manned fighter aircraft next year. Just recently, the service held a competition in which various companies developed AI-driven software to fly simulated fighter jets in a virtual environment, after which the winning team put their work up against a real fighter pilot. The AI pilot won a “flawless victory” against the human pilot, in the end, an outcome that has already stirred up much debate inside the U.S. military and out.

However the use of AI and machine learning continues to grow and evolve in the U.S. military, it is certainly a major area of focus broadly and systems such as Agile Condor are paving the way for this new era in warfighting.