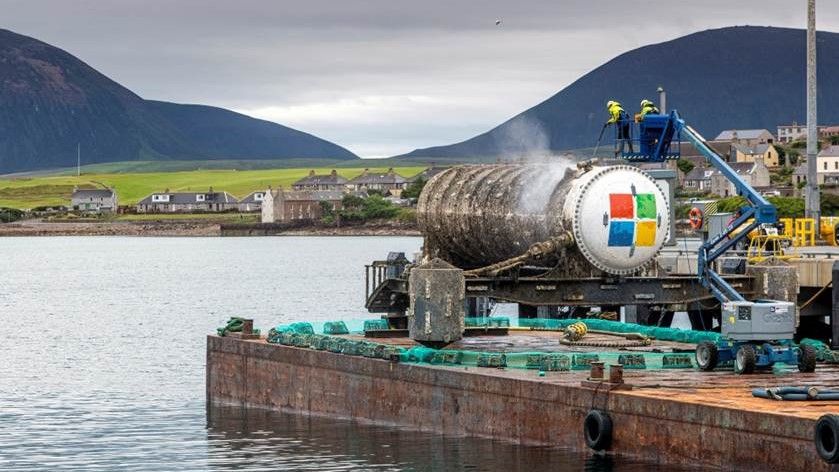 Two years ago, Microsoft’s Project Natick team conducted an experiment where it submerged a self-sustaining data center off the coast of Scotland’s Orkney Islands.

The data center has now been retrieved from the ocean floor and the company’s researchers have already learned a lot from the experiment.

For starters, the researchers found that the failure-rate for servers in the capsule was one-eighth of what they normally see on land with just eight out of the 855 servers deployed failing during the two-year period.

Project Natick lead Ben Cutler believes this is due to the fact that no humans were on board interacting with the servers in the capsule and that it was filled with nitrogen as opposed to oxygen. Nitrogen is less corrosive than oxygen and this could have helped the servers deteriorate less over time.

The success of Project Natick’s two-year experiment shows that underwater data centers could one day become commercially available to businesses looking for a more energy efficient and convenient way to store their data.

In fact, more than half the world’s population lives within 120 miles of the coast and by putting underwater data centers near coastal cities, data would have a shorter distance to travel and could therefore travel faster.

Microsoft’s experiment also showed that data centers can be powered entirely from renewable energy as all of the electricity in the Orkney Islands, where its underwater data center was located, comes from wind and solar power.

In a blog post, principal member of Microsoft Research’s technical team Spencer Fowers explained how the experiment’s findings could be used to improve how data centers use power, saying:

“We have been able to run really well on what most land-based datacenters consider an unreliable grid. We are hopeful that we can look at our findings and say maybe we don’t need to have quite as much infrastructure focused on power and reliability.”

Now that Microsoft has successfully deployed a data center underwater for a period of two years, we could one day see it or even other cloud computing providers follow suit with larger, more permanent underwater facilities.